Characteristics of the new and renewed boats 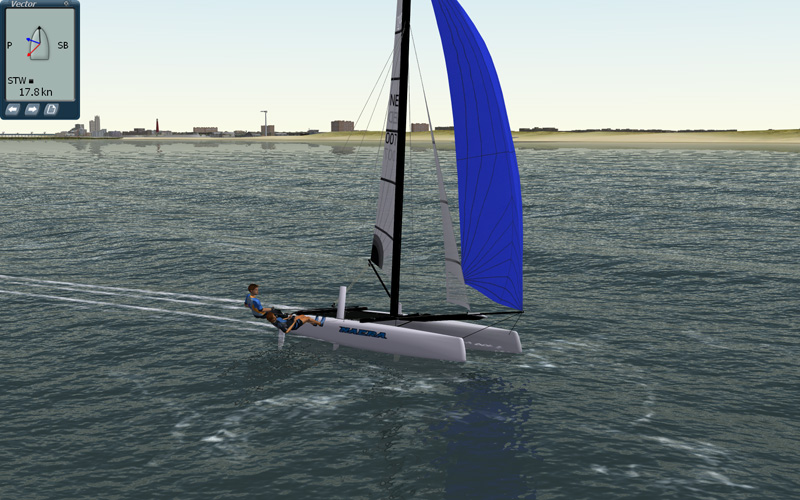 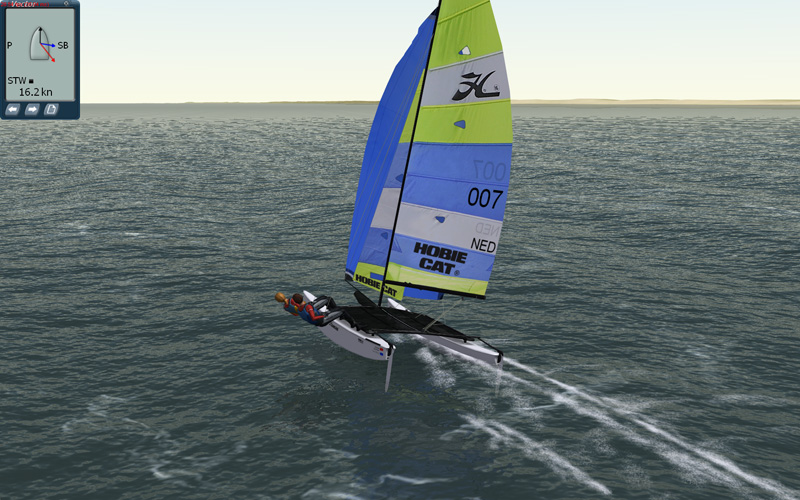 The Nacra infusion and Tiger F18 Cats are made for speed. They both outperform the older Hobie 16, although this type once owned the world speed sailing record.Sailing faster than the wind is easy, but we do not know yet if passing the wind sailing downwind with genaker is possible (-VMG > Vwind_abs) at certain conditions. The Nacra can has almost the same speed as the VOR below BFT 5. Due to increased hull drag the Hobie 16 is diving earlier than in the beta version. So take care and select a heavier helmsmen.

The 470 is the most popular boat until now.The sailing behaviour has been improved considerably in our opinion, mainly because of better physics that resulted in more power in the sails. 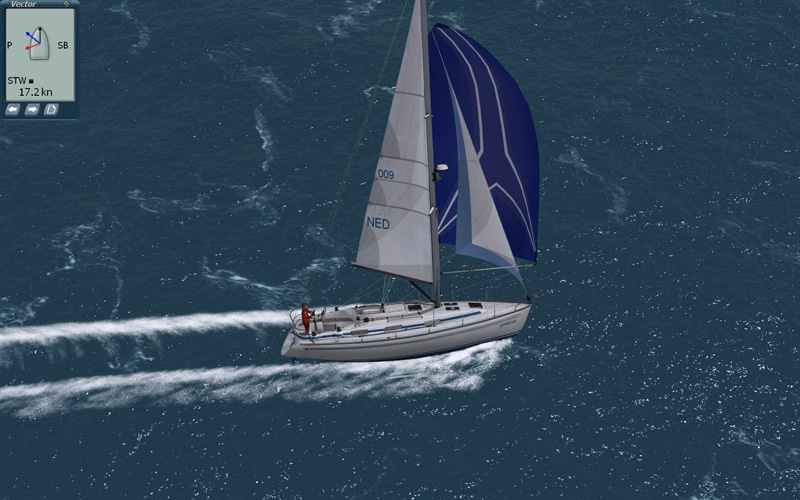 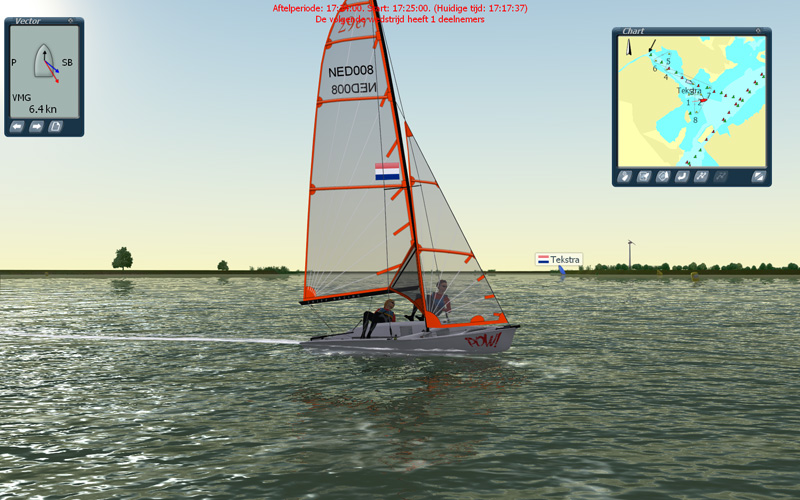 The Bavaria 36 with spinaker now is not just a normal Bavaria. In Sail Simulator 5.2 the speed at BFT5 under spinaker can be considerable. For example the 29er is faster but more difficult to sail. 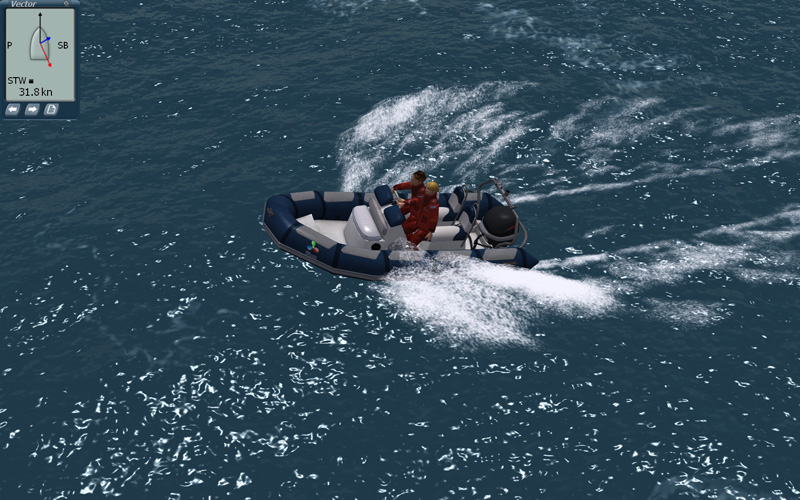 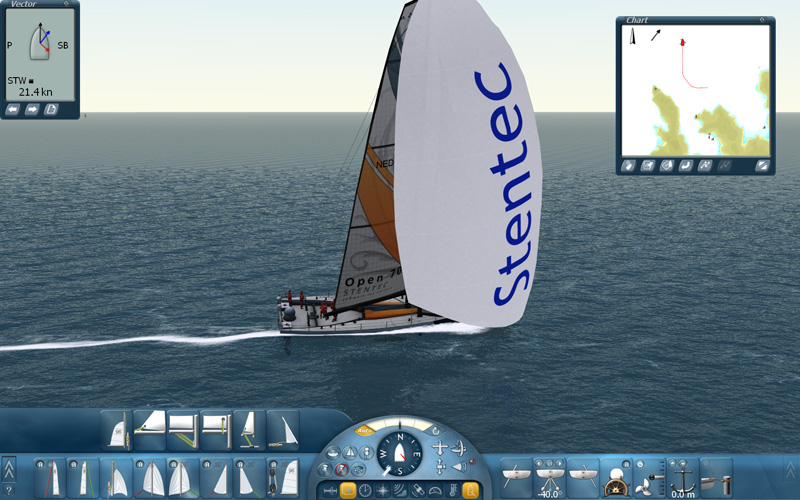 The RIB is now fast and stable on course even on the autopilot. It has a top speed above 30 knots. This allows beautiful camera work following almost all boats with exception of the VOR above BFT5. 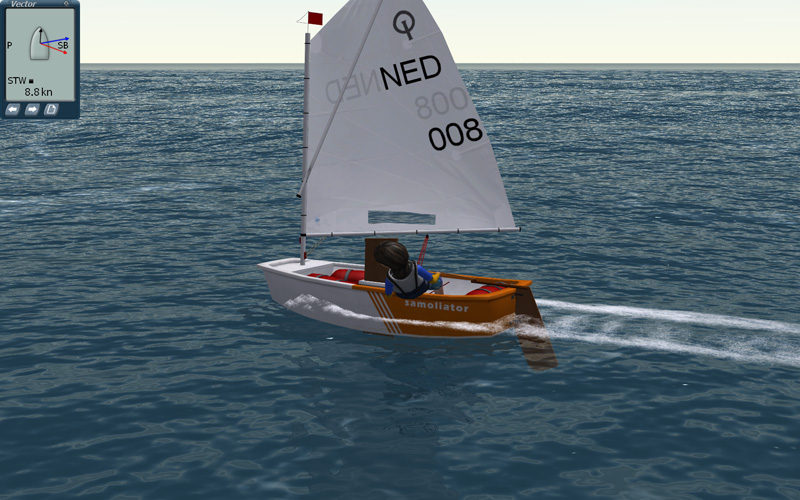 And then the Optimist. Whow. It's a racing maschine pure sang in high wind speeds. Easy to handle even by kids. Recommended for online sessions especially with a lot of short waves. Have fun.

The Splash and Flash are both easy to sail, like the new Laser Radial. 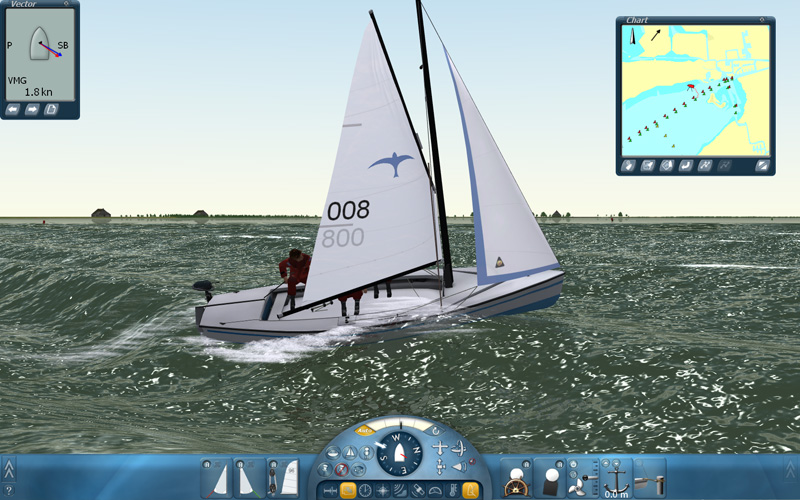 The PolyValk is the most popular sailing boat on the Dutch lakes. Also very popular for racing with a large fleet. It hass not the speed of the wooden racing Valk and also lacks the spi, but it is more comfortable above BFT 4.

The Fluessen/Heegermeer lake area in Friesland forms a perfect place for sheltered undeep water racing. The most frequent wind is BFT 3-4 SW giving relatively high waves in the NE corder near Heeg. About the depth. If you select the VOR you are suck in the mudd as soon as you enter the scenery. Using the wind depended wave setting the udeep water is preventing the waves to develop to greater height at windspeeds above BFT4. At high wind speeds the waves are unrealisticly long and relatively flat. To solve this problem open the Advanced setting and decrease the development until the Period is around 3.5 seconds. If you want to sail in braking waves simply increase the steepness from a standard value of 0,02 carefully up to 0,06 or higher. Do this for both waves but don't overdo to keep it sailable.

Technical information about the development of BoatSet 1 Add-On for Sail Simulator 5.2

A better aero- and hydrodynamical modelling was realized by improving the polar diagrams that describing the lift, drag and momentum coefficient of the sails, keel and rudder. A major bug in the calculation of the aspect ration (slenderness) has been fixed.

The sail battens now effectively remove flapping. They quarantee curvature highet ligf and less drag to the sail sections they influence. The curved top batten now gives more power for the 420, 470. The long battens in the main sail of the catamarans give increased speeds at low wind speed.

More power in the sails

A higher lift coefficient means more power in the sails. This also did increase the speed of the boats at low wind speeds. For the 470 full trapeze hanging is now possible at only 13 knots wind. 4 Bft now feels like 5 bft before.Take care when selecting the windspeed for a multiplayer session.

Better balance on the rudder

A more realistic Aspect ratio gives more power to the keer or centerboard, als when partly lifted. The leeway angle of the wake has been reduced giving resulting in a more realisic helm angle on a beat course.

For the standard boats the modelling has been improved to make them look and sail more realisticly. Modeling imperfections too time consuming to fit will probably be taken into account in future versions of Sail Simulator.

We developed a better buoy modelling takin an anchor and anchor line into account.This was looking nice and did give a realistic boat collision response. This was OK for single player mode, but in multiplayer mode the buoy positions were not the same for each user.Especially regatta buoys on deep water with long anchor lines did show difference of even more than 10 meter. This was mainly caused by differences in log-in time and frame rate. Calculating the buoy position on the server is the only good solution and is planned for a next version.For now the positions were fixed again, but the effect of wind and current can be seen on the buoy angle.